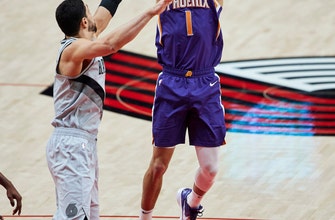 Devin Booker returned from the knee injury that kept him out of the All-Star Game to score 35 points and the Phoenix Suns beat the Portland Trail Blazers 127-121 on Thursday night for their fifth straight victory.

Chris Paul added 19 points for Phoenix, and Mikal Bridges scored 16 of his 18 points in the first half. Second in the NBA behind the Utah Jazz, the Suns have won 14 of their last 16 games.

Damian Lillard had 30 points for Portland, and Enes Kanter added 16 points and 11 rebounds. They had won three in a row.

The Suns trailed by 11 points in the third quarter, but pulled to 96-95 early in the fourth on Abdel Nader‘s 3-pointer. Cameron Payne followed up with a 3 of his own to put Phoenix in front.

Booker did not play in the All-Star Game on Sunday night because of a sprained left knee, which he injured in the Suns’ 120-98 victory at home over Golden State.

Booker was fouled late in the fourth quarter against the Blazers and came up limping after falling to the floor, but he remained in the game.

It was the second of three games between the two teams this season. The Suns won the first, 132-100, in Phoenix last month.

The teams played in Portland on March 10 of last year, the last game for both teams before the league was suspended by coronavirus concerns. The Blazers won 127-117.

Suns: Blazers coach Terry Stotts praised Paul in his pregame chat with reporters, saying he has shown this year and last year in Oklahoma City what a great player he is.”